Moe'uhane
It is known that the 'uhane in this universe have a pronounced affinity for sounds. Sometimes they are particularly drawn to the rustle of leaves in the late afternoon, or to the sound of sunlight and wind slipping between stalks of grain, or even to the rumbling incessant whispers of a growling sea. Thus, it is no surprise that their common love has drawn them ever closer to the Song of Songs, the melody that winds the clockwork of the cosmos. In their investigation of this sublime tune, the 'uhane realised that they too were compelled by the song that permeates the realms. And so, they built places to better worship the Song, circles of carved faces representing the heavenly Chorus of Muses.

In time, as the world's melody changed, bringing forth the seasons, the dutiful 'uhane refined their designs, and emphasized a certain aspect of the Song. These new temples allowed the most dedicated singers the ability to shape their souls into a better reflection of the melody. But, it is not that these new temples allowed a different song to be sung, or a new refrain to be woven into the melody. The Song was still supreme, only certain portions of the tune were discovered, teased out, and embodied as the "elements" of the world. These new, elemental forms bestowed unique abilities on the 'uhane that took them on, powers that represented the seasons from which they were drawn. It was in this way that the elements were discovered and brought into the Moe'uhane.

--On The Souls and Their Elements 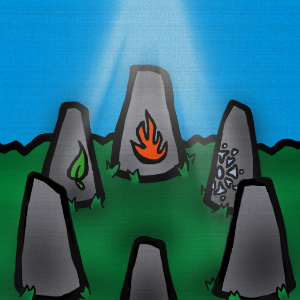 Temples are used by 'uhane to access their elemental natures. 'Uhane begin their existence elementally neutral, which allows them to take on any aspect they choose to embody. However, becoming aligned with a certain element requires knowledge of that element's essence, as well as time spent to absorb that essence. Understanding an element's essence can only be accomplished on the appropriate elemental temple, which means that an undedicated temple is insufficient for an 'uhane's personal change.

Arriving at an elemental temple is no easy matter. While an 'uhane can willfully direct the transformation process, temples can only be blindly influenced. If the temple does not align to the correct element, it must be razed and the entire process must begin again. Temples are less flexible than 'uhane in this way.

Each element is associated not only with a particular essence, but also with certain techniques -- both magical and mundane -- that aid 'uhane of that type. These abilities may only be studied by correctly aligned 'uhane, which means that an exploration of the full bounds of knowledge requires 'uhane of every elemental kind.